Carbon neutrality or having a net-zero carbon footprint means that greenhouse gas emissions released from the production and distribution of the of Santa Margherita Pinot Grigio Valdadige DOC have been neutralized with an equivalent amount of offsets.

Over the last six years, Santa Margherita has offset the amount of GHG emissions equivalent to what is trapped by approximately 15,000 acres of forest in one year

1 MEASURE THE QUANTITY OF CO2 (released from the production and distribution).

3 OFFSET the emissions that could not be reduced through investments in high-quality Canadian carbon offset projects.

Carbonzero is very pleased to provide Santa Margherita with a carbon offset project portfolio for their 2018 Pinot Grigio Carbonzero Certification.

The following is carbon offset portfolio to achieve the Carbonzero Certification and mitigate the resulting GHG emissions of 2,448 tCO2e from the production and distribution of Santa Margherita’s 2018 Pinot Grigio.

The Niagara Escarpment Forest Carbon Project (NEFCP) s publicly listed on the CSA CleanProjects Registry and has been 3rd party verified under ISO-14064-2 by Carbon Consult Group. This project promotes and maintains the function and diversity of ecosystems along Ontario’s Niagara escarpment. The Niagara escarpment stretches from Niagara Falls towards Tobermory and extends along Manitoulin Island.

Conditions within the properties managed by the Escarpment Biosphere Conservancy (EBC) vary significantly and range from very productive forestland, to open grasslands, to Alvar conditions with shallow soils. The EBC is a registered charity whose mission is to maintain, enhance or restore areas of native species or natural habitat, and to encourage and support scientific research and educational services related thereto. The EBC also educates the public about conservation and preservation of the landscape, ecology and wildlife of the Niagara Escarpment partly through providing low impact, ecologically sustainable recreational opportunities.

This project will promote and maintain forest cover, and ecosystem function, in areas where local dynamics (e.g. logging, mineral extraction, severances, etc.) increase pressures on land and wildlife. Establishing tree growth in these areas will contribute to carbon capture, and enhance biodiversity in the area. Project achievements will include, 50,000+ tCO2e of carbon reductions achieved between 2002 and 2016, protection of rare species, biodiversity, and geological features in their natural condition, encourages sustainable low-impact recreation, and protection of featured species such as, Pileated Woodpecker, Painted Turtle, and Great Grey Owl.

The Greenhouse GHG Reduction Project is publicly listed on the CSA CleanProjects Registry and has been 3rd party verified under ISO-14064-2. Created in 1980 by a group of citizens as a project to revive the village, the reputation of Serres Coopératives de Guyenne now exceeds the boundaries of the region. Ranking among the top five greenhouse operations in Quebec, the cooperative uses cutting edge technology. The greenhouse uses biomass as a fuel and is considered an emitter of biogenic CO2, which means that its combustion will not affect the total atmospheric CO2 if the biomass was obtained in a sustainable way. These emissions are hence not accounted for as GHG emissions in the quantification. By choosing biomass over commonly employed used oil, Serres Guyenne is contributing to reducing GHG emissions.

The Southern Quebec Afforestation Project is publicly listed on the CSA CleanProjects Registry and has been 3rd party verified under ISO-14064-2 by Fournier Toupin CPA Inc. The project was created in 2014 to plant on 15 abandoned lands (or not properly regenerated) in the historical and pastoral landscape of South-Eastern Quebec and will sequester a portion of Southern Quebec’s atmospheric carbon for at least 50 years. With a total project area of 75.9 hectares and more than 146,000 trees planted, this project is one of the largest of its kind in the region.

The Project has also integrated a unique visual artistic concept. Having selected Quebec–based First Nations artist Eruoma Awashish from Opiticiwan Reserve, an Atikamekw Community to create original two-dimensional artwork inspired by the theme of the environment and the fight against climate change. This work is being reproduced in the form of an art installation, which can be viewed from the air and from space by satellite. 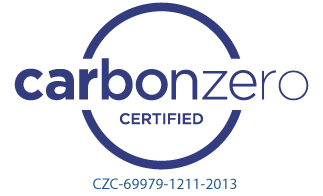 Carbonzero is a Canadian leader in carbon reduction strategies and solutions. It helps individuals, organizations, governments, foundations, and NGO's measure, manage and mitigate their climate impact.

Publish modules to the "offcanvas" position.